After spending the past couple months delving into fantasy races, monsters, and the nature of villains, I thought it was time to change things up a bit.  Let’s return to “Tears from Iron” and look at the inspirations behind the opening quote for one of the chapters.

As I’ve discussed before, I devised these quotes as a means of enhancing the story experience.  In many of them, I provide a bit more depth to some aspect of the world of Isfalinis that, while related to the events at hand, wouldn’t naturally come up in the narrative itself.  This is a technique to facilitate reader immersion by showing just how vast the world really is.  In others, I look more at thematic elements then the historic with the intent of providing a moment of contemplation as you move into each chapter.  But I wanted to make all of the quotes unnecessary.  This may seem paradoxical on the surface, but there’s a reason for it.  There are some readers, such as myself, who enjoy them while I know that others find them distracting.  Thus by making them non-essential, I can enhance one reader’s experience without hurting another’s.

“He who knows no pain and feels no fear, him I do not know.  But you who wail in the darkness, you who stand above the gaping maw of the Abyss though your heart trembles within you… you, I might call brother.” 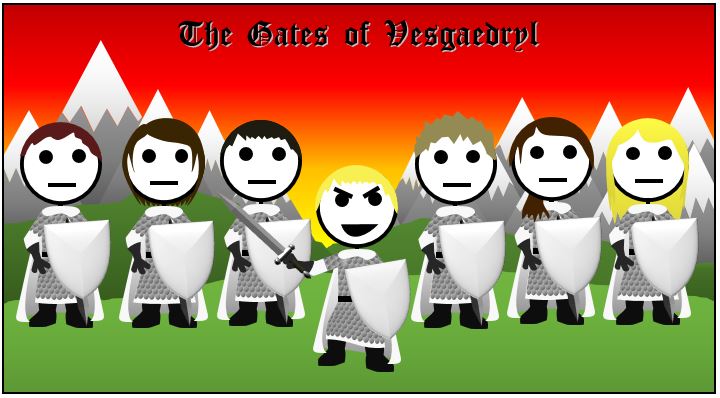 The Gates of Vesgaerdryl was one of the battles of the Great War before the Cataclysm.  It is inspired by such epic last stands as the Alamo or Thermopylae with the words above spoken by an equivalent to William Travis or King Leonidas.

Inspiration for Parys’ words go back to my junior high days when, with a growing interest in World War II, I took on the massive “Delivered from Evil” by Robert Leckie.  At nearly a thousand pages, it is a long read, but it is an excellent one.  In his brief biography on Erwin Rommel, commander of the German forces in North Africa, Leckie spends a few paragraphs contemplating the nature of courage.  Though it has been decades since I’ve read the book, the heart of that commentary has stuck with me.  He describes how courage can be found in the strangest places.  Among these, he recounts that sometimes it is the most fearful soldier who is the bravest of all.  Some men, full of false bravado, may boast of the deeds they’ll accomplish on the field of battle but break and flee as soon as bullets begin to fly.  Others who are terrified of the ordeal they’ll face, rise up with unexpected and unmatched courage.

I’ve also been troubled and annoyed by common themes I see in our culture about the absence of fear.  The old Nike campaign “No fear” is the most blatant example of a thread I see in movies and TV shows or read in books.

Fear is not the enemy.  It is a part of us.  It is something that makes us human.  Personally, I don’t know that I’d want to go into battle with someone who had no fear.  Fear tempers us and gives us wisdom.  It makes us weigh what lies before us rather than merely responding with brash disregard for our own lives or the lives of our comrades.

But it goes further than that.  Fear also joins us.  In ancient warfare, each combatant fought as an individual.  Even in battles with thousands of warriors present, every one of them was on their own.  But as civilizations developed, warriors ceased to be mere individuals and became part of something larger.  They became members of a unit.  They became soldiers.  These new formations became a source of incredible strength because the individual no longer had to be the strongest or the bravest or the best.  Each soldier relied on those to their right and left.  There were many other merits to this new system of waging war including those critical to the development of modern free societies, but I’ll avoid that tangent for today.  The point here is that these soldiers could fight side by side, supporting each other and they could bolster each other’s courage.

When warriors fought only as individuals, perhaps the absence of fear was a strength because they had no one but themselves to rely on.  But for soldiers, fighting in a unit, their shared fear and shared courage could meld them together.  As Parys says, it makes them brothers.

What People Believe in Isfalinis