In the previous article, we looked at how Talikae, though she began as a fleeting character upon the page, rose to play a significant part in the arcs of the two protagonists of “Tears from Iron.”  As we continue into this second part, we will follow her role as it evolved through the climax and into the resolution of the tale.

“I have long believed that history teeters upon the edge of a blade, where the slightest shifting decides the fate of thousands.  Some pray to the Etyni, perhaps because they were physical beings who once walked this world, shaping it with Words of Power.  Others bow before the world itself, the raw power of its fire and wind and water or beseeching the spirits they attribute to the trees and rivers.  But I worship His Highest Above, for at all moments it is he whose breath falls upon the blade.”

When I brought Talikae back in the third act of the novel and introduced her to Belarrin, the interchange opened her eyes a little bit more.  From there, it was a very obvious choice to bring her in to witness the attempted assassination of Empress Kayrstana.  By this point, she had become a significant part of the story and there really was no other option.

This led me to two inevitable truths.  First, Talikae now warranted a full arc all her own.  Hers had become an open thread that had to be tied up by the end of the novel.  She was no longer a character who could disappear without acknowledgement of her final fate.  Second, and more subtly, so subtly that I didn’t observe it at first, Talikae’s journey had become a mirror of Belarrin’s.

I’ll begin with the first of these truths.  As I moved into the climax, Talikae became a piece on the game board along with Belarrin, Sravika, Ninanna, the Sword-Singers, the Scions, the t’Okaedrin, Reigliff, Empress Kayrstana, the loyal high lords like Tyrnis, and the rebel high lords with Ushtyl chief among them.

With so many pieces to move, it was inevitable that I got it wrong before I got it right.  I knew I had to link the executions with the Scion attack, the Sword-Whisperer intervention, and the unleashing of Belarrin.  Beyond that, though, it was a puzzle that I had to wrestle together.

While my first draft got the greater part of the climax shell correct, one of the big mistakes was Talikae.  In it, much like the final version, Talikae moved beyond the lies to see the truth.  She was a slave.  Yet her response to it was very different.  In that version, she became a creature of rage and hate.  Consumed with fury for how Empress Kayrstana had used her sister, Draatha, Talikae took advantage of the fact that servants such as herself were barely noticed.  She crept up on Kayrstana and, in the midst of the turmoil, leapt forward to attack and wound the empress.  In the ensuing chaos, she slipped away.

The main reason for this sequence of events was from my need to preoccupy or remove Kayrstana and Medreuneth while the rest of the climax unfolded.  As a powerful sorceress, Medreuneth was the primary threat to Belarrin and I needed to remove her from the picture so I could proceed with my primary goals.  In other words, I broke a core rule of writing.  I compromised character to achieve a contrivance of plot.  I took the easy path rather than delving further for the more elegant and true answer.

For another character, this might have worked.  There was a certain pleasant retribution to it.  But to write Talikae in this way was to betray who she was.  She wasn’t a warrior.  She was a kind-hearted woman who still retained her innocence even after all she’d witnessed.  I am grateful to one of my friends for first observing the dissonance.  In a discussion with him, the kernel of the solution came to light.  From that, Talikae grew to become “the breath on the blade.”  She stays true to herself and, even in a time of great sorrow, tragedy, rage, and hope, she acts with selfless compassion.  She frees Belarrin, the tortured soul, and changes the world. 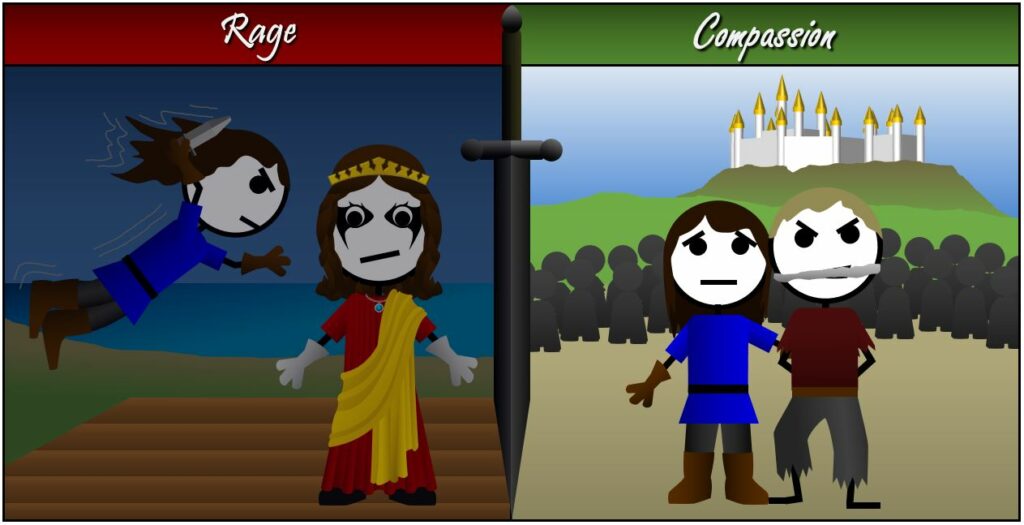 It was only when I looked back on this that I saw how Talikae’s path served as a mirror to Belarrin’s.  Both of them begin “Tears from Iron” as slaves who aren’t aware of their own captivity.  Over the course of the novel, they begin to question that alleged truth, and each realizes it for the lie that it is.  This path is also shared with Hirnid and, to a lesser degree, Bridionis because he only sees the truth in the final moment of his life.  Yet what is interesting to me about Talikae (and Hirnid as well), is that she didn’t have to be pushed and pulled along the path to truth like Belarrin.  She observed and listened.  In the end, she wasn’t changed from any great philosophical revelation or after having some mathematical proof laid before her.  She changed because of what she saw in others.  For Hirnid, it was the compassion and courage of Chostir along with his great respect for Belarrin himself that stood in stark contrast to Arcomin.  For Talikae, it was the kindness of Ninanna and Belarrin in contrast to the murderous indifference of Kayrstana and the other Syraestari.  I think this speaks to a fundamental truth of the human condition.  Very rarely do we believe something because of rational proofs.  We believe because of feelings and observations.  It is behaviors like kindness, generosity, humility, trustworthiness, and selflessness that sway us while cruelty, greed, pride, unreliability, and selfishness turn us away.

I’m tempted to end this article with that concluding thought, but to do so ignores a critical final question.  It is a question for which I lack a perfect answer, even as I know it is as it should be.

Why did Talikae have to die?

In the early draft where she attacked Kayrstana, Talikae survived and marched off happily into her beloved forest along with the Scions.  But once I changed her role to freed Belarrin, her life became forfeit.  Why?  I think the simplest answer is that there is always a price for victory.  In the end, good triumphs over evil, but not without tragedy and sorrow.  Talikae’s is the quintessential heroic sacrifice.  As I’ve mentioned in the past, I wasn’t sure if Belarrin was going to die at the end of the story or not.  He certainly deserved to die for his many heinous crimes.  But once I decided that he had to live, someone else had to pay the price for him.  That person was Talikae.  I say again that there must be that price.  Otherwise I’m telling a story of rainbows and unicorns devoid of the hard truths of human existence.

Another way to look at this is from the perspective of what comes after.  Obviously, the full impact of Talikae’s sacrifice isn’t seen in the pages of the story because “Tears from Iron” wraps up very quickly after the climactic battle ends.  But one of the things that makes a story more real is the belief in the reader that the characters are alive and real in their imaginations.  Part of accepting this is the ‘shared belief’ that the characters continue to live after the last page.  This is the fundamental truth behind that cliché of closing lines “and they lived happily ever after.”  It is the reason why we yearn for epilogues.  In this, the importance of Talikae’s death lies in what it means for Belarrin and Ninanna after the story.

Though the exact impact can’t be known for sure, we have clues.  For example, despite his weariness, Belarrin carries Talikae from the battlefield.  Later, Ninanna takes up that burden.  This is a mark of their sorrow and an acknowledgement of the importance she played in both their lives after but a few short encounters.  If Talikae had survived and walked out on her own, she would’ve become just another face amid the mass of survivors.  But by dying, she became a symbol.  She is a martyr, a sacrifice for both Belarrin and Ninanna.  Yet while she is a martyr, she didn’t become a symbol of hate in her death any more than in her life.  She isn’t about the cruelty of the oppressive Syraestari empire and its indifference to human suffering.  On the contrary, she is a reminder of selfless sacrifice and love.  She is a reminder of the imperfections in Belarrin and Ninanna that meant they couldn’t save her.  She is a symbol of those greatest traits we see in our true heroes:  kindness, humility, and grace.  In this, we can hope that as Belarrin and Ninanna face new challenges in the wilds north of the Kayrstaran Empire, they are reminded and inspired by such a woman to become both stronger and better for her example.

He Who Knows No Fear

Writing is an Act of Faith

A Tale of Too Many Tales