[The Aestari] are tall, taller even than the Humans or the Ie’dhae who came after, and slight of frame with long features, sharp noses, angular cheeks, and pointed ears.  To some she gave hair that was fair, blond, white, or yellow, while others were gifted tresses brown or black.  Their eyes are blue, green or gray or, more rarely brown or black while in complexion they are all as fair as she who her people came to lovingly call the White Lady…

To the Aestari, Ainii gave the joy of the world, the wonder of the elements, and the twinge for the solitary.  The Aestari love the forests most of all and the lonely mountains after.  Yet though they revel in quiet contemplation or music of beauty as the rain, they are first and foremost a single people, united in their love for their White Lady… Ainii placed them all as one in a single place along the soothing shores of Lake Kainen Henjis within the southern forests of the world.

~Excerpts from Dirtarnys’ “A Treatise on Creation and the Lost Age”

As I discussed last time, the Aestari are undeniably and unrelentingly the Elves of Isfalinis.  In my early attempts at storytelling, I even called them elves.  The name Aestari was only given to them to provide a moniker uniquely their own, much like Tolkien’s Noldor and Sindar or the Elder Scrolls’ Altmer and Dunmer.

I made no attempts to make the aestari markedly unique from elves of other tales, excepting perhaps a few styles that I didn’t care for such as the aforementioned predilection in some circles for elves to be short or the idea that some elves are subterranean.

Does that make them cliché?

Some might argue yes, and that’s fine.  My approach, rather than to strive for something different, was instead to explore more fully what those popular motifs might mean.  This exploration can be divided into two parts:  longevity and oneness.

The Nature of Agelessness – Life Stages and Memories

A great deal remains unexplored concerning the concept of agelessness as it lies in juxtaposition to our own mortal lives, or even in comparison to the simpler longevity that is common with elves in many stories.  Tolkien’s elves were ageless, too, but I wanted to delve to deeper meanings.  I love his books and intend no disrespect, but frankly I’m not sure what his elves do day to day.  My biggest impression is that they sit around and sing songs, waxing philosophically about days lost.  I never get the sense that some of them plant potatoes, thatch a roof, or sheer a sheep.  They must do some sort of menial labor.  After all they need food to survive.  But it is hard to imagine.  In contrast, the aestari do all of these things or, as is more likely in the case of the Syraestari, subjugate Humans to do it for them.

Yet agelessness is more than that.  Humans have stages of life that carry common behaviors from the terrible two’s to teenage rebellion to the mid-life crisis.  Why shouldn’t elves follow patterns of their own?  Being ageless doesn’t mean they don’t live and experience the passing of years.  There sense of time is simply different.  With this in mind, I sketched out their life stages.  Here are a couple examples.

Through the period which for humans of our modern era would be about middle-age, aestari behaviors are fairly similar to what we see among humans.  But somewhere around their 70th year, it is common for aestari to get their first true concept of immortality.  They’ve known about it all their lives, but now is when it truly sinks in.  This is especially common in aestari who live around humans as opposed to those in isolation.  For some, this stage is a second childhood where rash choices are made driven by a renewed sense of invincibility.  For others, there is a decision to begin all over because they don’t like where life has taken them thus far.  Unlike humans, they have greater opportunity for a ‘do-over’ and choose to claim it.

Within another century, however, most aestari face a sobering return to mortality.  In this stage of their lives, their behavior is often specifically contrary to how they acted in the decades immediately prior.  Halcyon dreams are overpowered by the sense that death is all around them.  Agelessness doesn’t mean immortal and they realize the eternity they once saw as certain may be cut short.  This is particularly true in times of crisis, such as during the Cataclysm, or among those who lived particularly brashly.  Aestari in this period can experience serious depression and, in the most severe cases, they may give up on life entirely and fade away.  True blossoming begins around the fourth century of their lives, after they have weathered the highs and lows of agelessness.  Most, by this time, have achieved a certain measure of equilibrium.

Like humans, aestari also forget.  Their memories aren’t any better than ours, aside from a lack of mental decay.  Perhaps their biggest blessing is that they aren’t afflicted by those treacherous memory diseases such as Alzheimer’s.  But as you look at your own life could you, even in your twenties, honestly remember all the events of your teens?  Imagine how much an Aestari at a thousand years must have forgotten, both of their own lives and also of what they’ve learned.

Yet just as we have certain moments in our lives that stand out because they were especially terrifying, embarrassing, or wonderful, so to, do the Aestari.  Indeed, their recollection of such events is particularly poignant.  They may be afflicted by what are called “memory dreams” wherein their sleep is invaded again and again by specific detailed memories of tragedies long past.

The second major exploration I’ve undergone with the aestari relates to the concept of “High” and “Dark”, or as they are sometimes called in Isfalinis, “Bound” and “True.”

As Dirtranys recounted in the opening quote, the Aestari originated as a single people who all lived together in one place joined together in love for their Shaper, Ainii.  Thus while individually they may have inclinations toward solitude, they were formed with an instinctual unity unparalleled by the other three races.  Yet during the Schism, this oneness was shattered and that breaking was made irredeemable by the murder of Ainii herself.

The aestari broke into two irreconcilable groups.  The first of these was the Hiraestari (High Elves) who clung to their ancient Oath never to put themselves above the other races.  The second was the Syraestari (aka Dark Elves) who believed that the Oath was a form of bondage.  Thus the High and Dark Elves aren’t two peoples with physical and sociological differences, but rather a single people irrevocably divided by philosophy.

One theme common in a lot of fantasy is the concept of good and evil races.  Often Orcs and Goblins, while being portrayed as sentient people are termed evil while the Elves and Dwarves are named good.  But are Dwarves good?  They are frequently depicted as greedy, territorial, and violent.  Are Elves any better?  They often come across as arrogant, intransigently rigid, and incapable of mercy.  I’ve never cared for racial classifications of this sort.  Such delineations don’t exist in our world and I don’t believe they make much sense in fantasy, either.  This concept of racial good and evil is touched on a little in “Tears from Iron” and will be explored much more fully in the forthcoming “A Whisper in the Sand.”  For that reason, I won’t delve any further here and let that tale speak for itself. 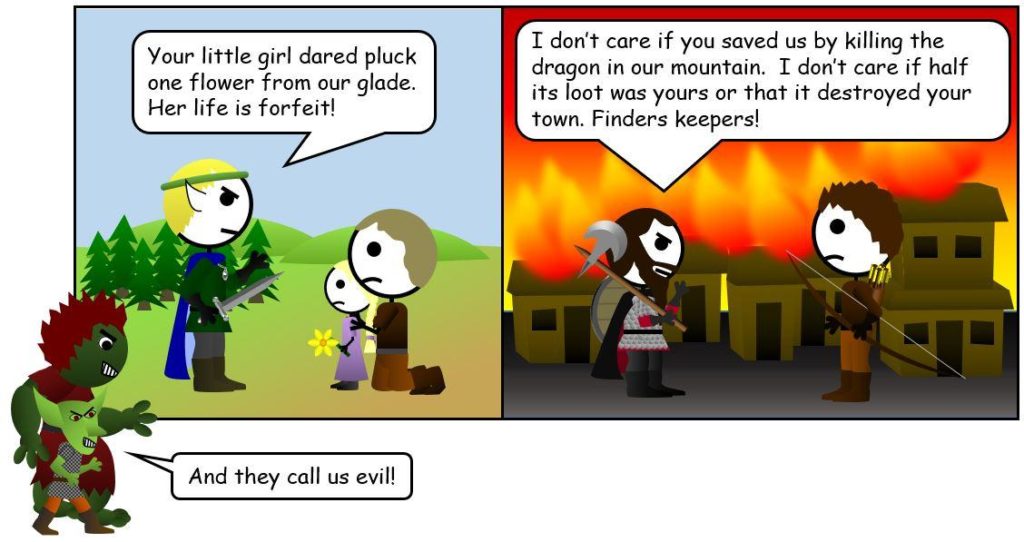 What Came First, the World or the Story?

A Tome by Any Other Name