As I mentioned in one of my early articles, part of the reason I became an author is that I can’t draw.  I see imagery in my head and, rather than portray it in a drawing, I paint it with words.  I liken it to flipping the old expression on its head:  “A thousand words is worth a picture.”

Nevertheless, when I’m developing my stories, I do a lot of visual work.  The biggest aspect of this is mapping, but I’ll save that for another article.  Today, instead, we’ll look at something smaller.  Eye paint.

This is an affectation used by all members of the Syraestari.  Even those at the lowest rungs of society or otherwise possessing more austere outlooks wear eye paint.  Their makeup might be simpler, but it is still present.  It is a fundamental part of the early imperial culture.

The inspiration for this idea came, probably not surprisingly, from Ancient Egypt.  I wanted to avoid making the world of “Tears from Iron” strictly medieval.  In subsequent years, it will move into that stage of technology and culture, but it isn’t there yet.  The weapons and armor are generally what you’d see in the late classical world, with a few exceptions (such as the greatswords of the Sword-Whisperers).  Warriors fight in scaled mail and wield swords, spears, and bows.  Slingers aren’t unheard of.  The citizenry wear robes and dresses while breeches are reserved more for warriors and the human labor force.

Yet while I alluded to Egyptian style in an effort to bring out some old world elegance, I wanted to take it a step further.  Thus members of the higher echelons of Syraestari society, including the empress and her high lords and ladies, often add embellishments to their eye paint to give themselves a personal style.

In order to visualize this, I made rather simplistic drawings (in PowerPoint) of what these styles might be to help me describe them better and ensure that each was unique.  Below, you’ll see what I came up with for this purpose. 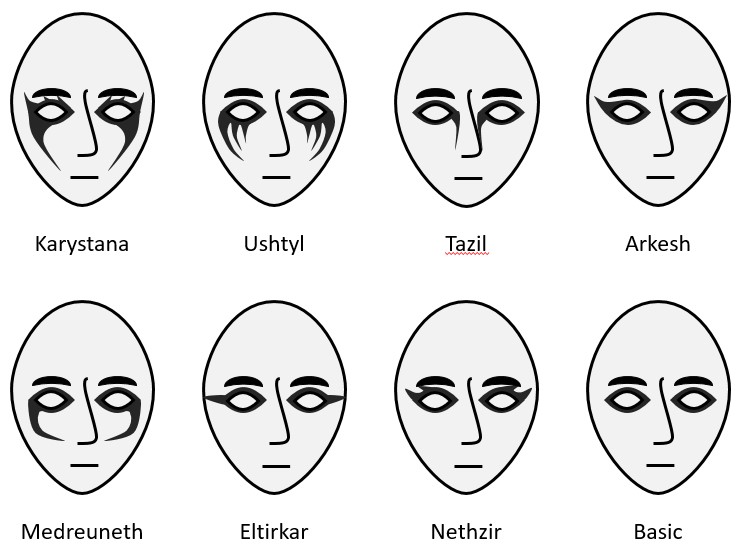 As I prepared for this article, I realized that I never actually describe High Lord Ushtyl’s eye paint in the final version of the novel.  While I don’t recall the exact reasoning, I believe it was because Ushtyl is always a Point of View character until his encounter with Lady Ninanna in Chapter 8.  This is the first time he is actually “seen” by someone else and therefore it is the first time I can describe details short of attempting authorial tropes like having him look in a mirror… something I will not do.  By Chapter 8, readers will already have developed their own mental images of what Ushtyl looks like so anything at this level of detail could only serve to disrupt that image.

In the interests of full disclosure, the opposite is true for High Lord Arkesh.  I do describe his eye paint in the book, but never drew what it looked like when I was writing the novel.  Thus, the drawing you see of Arkesh above was done in preparation for this article based on the description from the book:  “He stood taller than Ushtyl, with a shock of curly brown hair and dark brown eyes, edged with paint that flared back toward his ears.”

The use of eye paint proved, in the long run, to be something of a fad within the empire.  By the time of “A Whisper in the Sand”, my forthcoming novel, it has fallen into disuse.  A few Syraestari still prefer the old styles including eye paint, but most consider it garish and unfashionable.  It is generally used only to mark the wearer as someone in mourning.

Teaser: A Treatise on Creation and the Lost Age

Quotes: The Birth of Empire