How long should a book series be?  Is there really even an answer to this question?

I believe there is an ideal length for a series… somewhere between three to six books.  This is based on two concepts:  re-readability and authorial discipline.  This isn’t to say a series can’t be longer, of course.  Yet as a general rule I’d argue that this length is preferable.

There are those who read a book once and never come back.  There are others, myself included, who love to revisit adventures we’ve enjoyed and loved.  For the first type of reader, the length of a series matters far less because a book is a book and each is only experienced once.  For the second type, though, the length can be very important.

The idea for this topic came to me as I was working through the “Is Combat Boring” series.  Consider this.  You’ve just finished off a particularly grueling tome.  Perhaps you were reading something non-fiction that was weighty and complex and are looking for a break.  Perhaps you’ve just finished a book or a series that was mediocre at best and are longing for something great.  Perhaps this whole COVID thing is getting to you and you’d just like to return to some glorious fantastical place you know and love.  But you don’t want to spend your lifetime doing it.

Let’s use the three series I’ve used these past few weeks as an example.  You could reread “The Lord of the Rings.”  It is three books and 480,000 words.  If you’ve got an hour a day to devote to pleasure reading and you read at an average rate, it’ll take you just over a month to finish.  Or there is “The Prydain Chronicles.”  It has five books but is estimated at only 255,000 words.  That would take about three weeks.  Finally, we have “The Wheel of Time”… fourteen books and a whopping 4.4 million words!  Time to buckle down because you’re looking at a year of your life invested.

Why am I talking about this?  Because I’d love to reread “The Wheel of Time” but I don’t want to invest a year or more in the process.  I don’t have as much time to read these days between writing and all of life’s other demands.  Because of that, I don’t know that I’ll ever take on the series again.  The endeavor is just too great and that’s unfortunate.  I suspect I am not alone.

Yet this soapbox is only part of the discussion.  Re-readability is key, not just for the reader but also for the author.  Read a book once and say “yeah, great.”  Read it again and again and you are much more likely to recommend it to a friend.  Of course, this can be overcome.  The wide popularity of the aforementioned “The Wheel of Time” is proof of this.  Yet, we aren’t all Robert Jordan’s.  Furthermore, true longevity for a story exists in its ability to be re-experienced over and over again, generation by generation.  This is what “The Lord of the Rings” has achieved and why it continues to be one of the top selling series sixty-five years after it was completed.  Will that prove true for the “Wheel of Time”?  I’m skeptical.  Not because the story isn’t great, but because it can only be revisited with difficulty and thus is less likely to be passed on generationally. 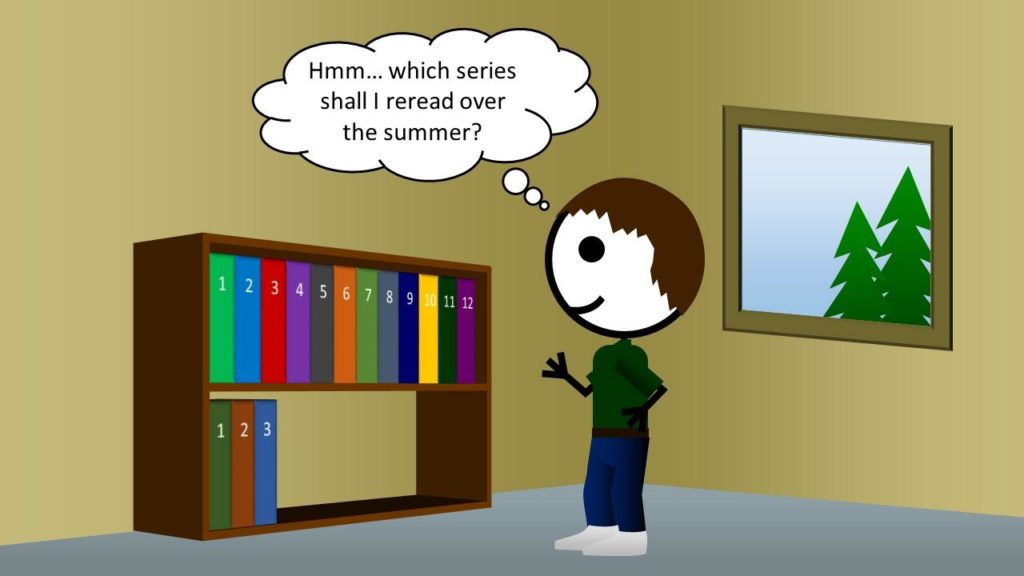 The second reason relates to authorial discipline and their ability to maintain control over their series in order to avoid what can be likened to ‘mission creep.’  This may sound like an affliction for authors only, but it is passed on to readers in terms of despair and frustration.

Mission Creep is a military term to describe how the goals of a campaign may grow over time resulting in unplanned objectives and over-commitment.  The focus of the original strategy is lost to various distractions resulting in a dilution of resources and focus.  This means that the original goal may not get the attention it needs.  It withers and may fail, resulting in the cascading failures of all those secondary goals as well.

For books, this happens when an author loses the focus of his story to an ever increasing number of tangents, plots, and sub-arcs.  Sub-arcs can be very important and valuable to a story.  Kept contained and properly pruned, they enhance the greater tale.  But if they grow and branch and branch again, like… well… a virus, the story spirals out of control and the root… its heart… gets lost.  The books get sickly and the series may die.

It is the nature of both a single story and an entire series to be like two halves of a funnel placed against each other forming a diamond shape.  Stories begin at a single point with that first word, gradually growing and expanding outward to encompass the entirety of its plot, characters, and themes.  But inevitably, that expansion must contract again.  The various threads that have grown out of the story must all weave back together, narrower and narrower to a final point.  They should all meet by the final page.  Failure to do this means you have, at best, dangling threads and, at worse, a never-ending story.  But the problem is more invasive than that.  Even if a series ends, readers may not be there to see it.

Why?  Because they give up hope of a conclusion.  The first book of a series is expected to conclude with unresolved threads.  Indeed, the second book may have even more.  But at some point there will come a growing expectation that more threads will be resolved than new ones open.  An ever-increasing number of threads book-to-book in the latter stages of a series speaks to an author’s inability to contain themselves.  Even worse, it creates doubt in the reader’s mind of the author’s ultimate ability to resolve their story.

I’m going to go back to Robert Jordan for this one.  As I do, I want to reiterate that I do so only with the greatest of admiration.  I loved reading “The Wheel of Time”.  Jordan is a fantastic author with many strengths… but his ‘mission creep’ was a great flaw that has been a source of increasing frustration for me and many other readers.  Rather than getting better over time, it got worse.  Ironically, the first few books were rather contained and on track.  As I mentioned last time, between Book IV and Book VI, the story began to expand in scope.  Even then, it had a track and a focus.  It was in Book VII after Rand’s escape from the box where everything spiraled out of control.  Indeed, in many of the books of the second half of the series, the prologue consumes 10% of the novel and is often four times bigger than any other chapter.  It is in these prologues where a host of new characters, new ideas, and new threads were introduced at a time when threads should have been shrinking.  For myself, reading these prologues became something of an exercise in despair.  I persevered to finish the series, but many of my friends who had enjoyed the early books fell by the wayside.

What’s my point?  Just as there are authorial promises about the nature of the story an author is telling, there is one authorial promise that rises above all others… that they can and will finish what they’ve started.  If an author can’t keep that promise alive, they will lose readers.  Does this mean that Jordan failed because he couldn’t persist in holding to that promise?  Of course not!  Only a fool would make such a claim looking at his great success.  But he is the exception, not the rule and I’d argue his success would’ve been even greater and more long-lasting if he could’ve controlled his story.

To conclude, a modest series length is a statement of control.  It tells the reader that there will be an end and they won’t collapse in exhaustion on their journey to that final satisfying resolution.  This is the reason why I recommend three to six books.  It is re-readable without a massive investment in time allowing those who enjoyed the tale to relive it and to, perhaps, once again, recommend it to acquaintances.  It also constrains authorial ambitions, providing focus and control.  It is inevitable that readers will fall away from a series for a multitude of reasons.  It may not speak to them.  Perhaps it isn’t the kind of story they care for.  Or maybe they’re distracted by other things in life.  This is normal because we are all different.  But the greater tragedy is when readers who are enjoying a series give up simply because the author has become lost in a quagmire of their own creation.

Corona, Or the Future of Fantasy